A guide to lead-creation-touch attribution models 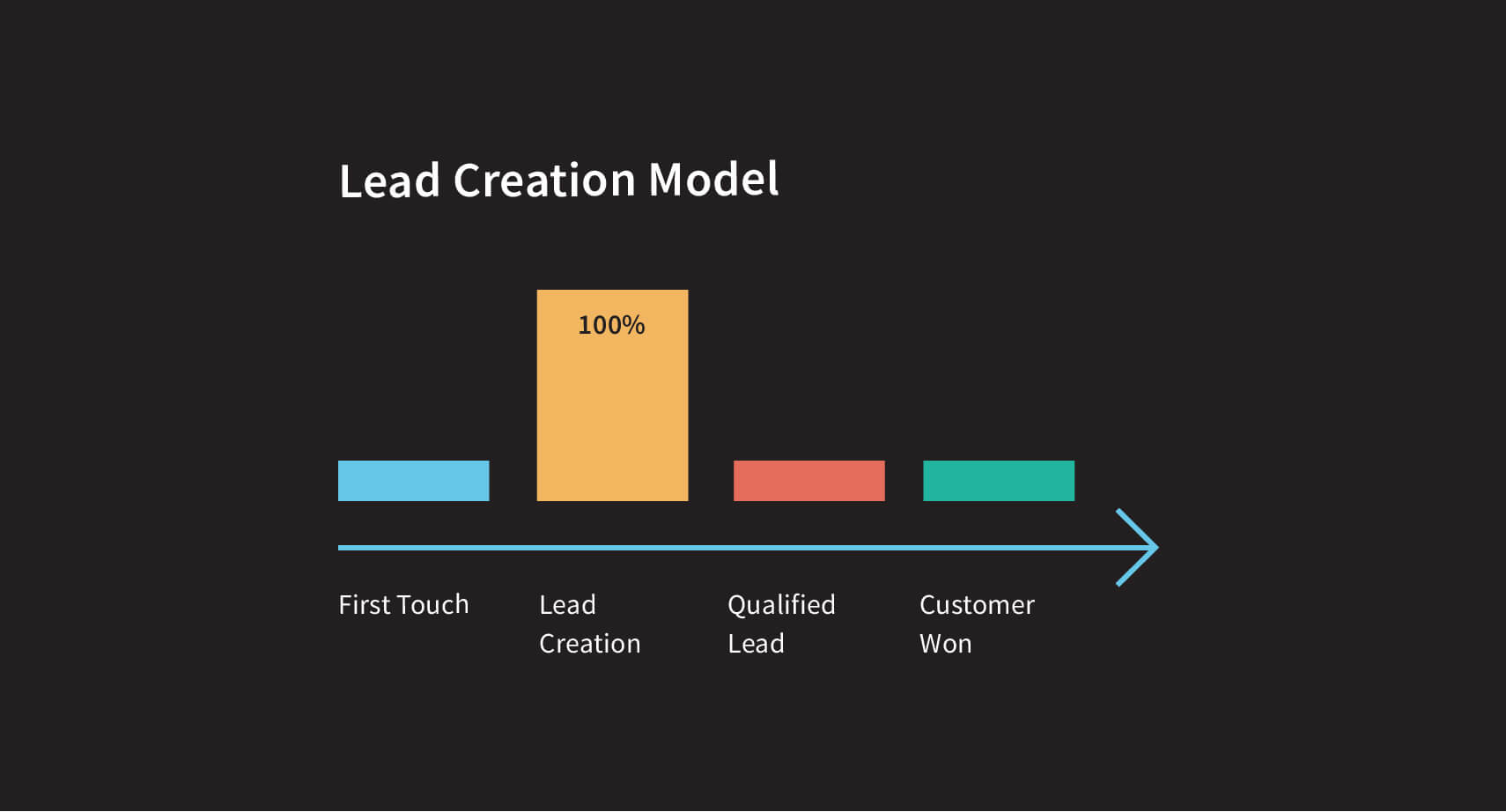 When does a prospect become a lead?

A prospect is right at the beginning of the customer journey, at the beginning stages of the funnel. Perhaps they’ve browsed through your website, liked your company’s Instagram page, or walked around your store on a number of occasions.

On the other hand, a lead has voluntarily exchanged their personal details with you–for instance, they might have signed up for a webinar or subscribed to your newsletter. This means that they’re further along the customer journey than a mere prospect, and therefore deserve to be marketed to in a different manner.

For example, you might consider retargeting a prospect who’s visited your website with social ads–this is a pretty non-intrusive way of reminding them about your company and preventing them from permanently lapsing. But with a genuine lead, you should probably send out something stronger like personalized emails. You know what they’re after and they’ve agreed to give you their email address, so it’s time to sell to them directly.

Why does this distinction matter?

Lead-creation-touch models put a lot of emphasis on the distinction between prospects and leads. In fact, they even go as far as giving this lead-creation touch 100% of the overall sale’s credit. The theory here goes as follows: when you’re marketing to a prospect, you don’t necessarily know what works and what doesn’t–the main thing to focus on is making them into a lead.

Once they’re a lead, not only have they given you their contact details (which is crucial to ongoing marketing efforts), but they’ve also demonstrated what they’re interested in, and agreed to be contacted by your company in the future. Needless to say, it’s far easier to convert a lead than it is to convert a prospect. This is why lead-creation-touch models put so much emphasis on this milestone. But there’s another reason why lead-creation-touch attribution makes so much sense.

In most organizations, marketing and sales teams work together to convert prospects into leads, and leads into paying customers. Marketing teams are generally responsible for the first half of the funnel, for acquiring prospects and converting them into leads. Once they’re a qualified lead, however, sales teams often take the reins: following up with phone calls, leading demos, etc.

This means that the lead-creation-touch model makes it very easy to assess how effective your marketing strategy itself has been, regardless of how well the sales team performs after you hand the leads over. Therefore, this model gives you a more accurate picture of how well your marketing team is performing in isolation.

This will then give credit to the last touchpoint before a customer calls/texts one of your tracking numbers, or submits a form. It’s also a good model as it shows what precisely drives lead conversions. Given how much more personalized you can make your marketing once a prospect has become a lead, and how much more effective this makes your overall marketing strategy, it’s crucial that you convert prospects into leads.

As mentioned above, this is the marketing team’s overall mission, and so lead-creation-touch models hone in on this point: has the team been successful in completing its mission of producing leads, and if so, which specific channels have been particularly useful.

Like all other single-touch models, lead-creation attribution is just too simplistic to give you an in-depth (and entirely accurate) view of your customers’ journeys. It’s rarely the case that one single milestone/touchpoint was entirely responsible for a customer’s decision to convert; as a result, this attribution model can be slightly misleading.

If your lead-conversion milestones always receive 100% of the credit then you’ll begin to pour almost all of your future investment into these channels. There’s nothing necessarily wrong with doing this–especially if a variety of your strategies across multiple channels are all effective in converting prospects into leads. However, this often isn’t what happens.

How often do your prospects go directly from liking one of your ads on social to signing up for your newsletter? Probably not all that frequently. In fact, it’s likely that you don’t even have a direct link between your Facebook page and your newsletter sign-up form. The relevance to this?

It’s clear that the customer would have never known about your brand if it weren’t for the initial ad on social–and yet, this is completely ignored when you assign credit to the sale. Sure, the fact that they visited your website was also important, but what if they didn’t even browse around and simply signed up for the newsletter straight away?

In this case, the ad on social was essentially the last-touch milestone–however, by making prospects visit your website in order to sign up for your newsletter in the first place, this is completely ignored.

When should you use a lead-creation-touch attribution model?

There are a couple of questions you need to take into consideration when wondering if a lead-creation-touch attribution model is right for you.

If your typical consumer journey is very short, it might not make sense to adopt a lead-creation-touch model. Often, you won’t even have a chance for prospects to turn into leads before they turn into customers.

If on the other hand you have a longer, more complex buying journey–involving multiple different strategies and milestones–then it might be worth using this model. After all, turning a prospect into a lead is a key stage in the consumer’s journey to conversion. However, it’s also important to consider the average number of steps between a prospect becoming a lead, and the moment a lead becomes a customer.

Let’s say that one of your prospects signs up for a demo. They take a detailed demo with a member of your sales team and, as a result, usually end up buying your product right after it’s finished. In this instance, it makes sense to give 100% of the credit to the lead-creation-touch milestone. By the time they’d signed up for a demo, it was almost a foregone conclusion that they’d end up converting.

Now let’s imagine an alternative scenario where a prospect signs up for your newsletter after visiting your website. They’re still a lead, but they’re a lot colder a lead than someone who signs up for a demo. They might require multiple different newsletters which eventually brings them back to your site, before they then decide to go through a demo, have a number of follow-up calls from one of your salespeople, and eventually convert.

While it was important that the lead signed up for your newsletter, there were still multiple different steps before they converted into becoming a customer. The lead-creation touch (when they initially visited your website) wasn’t actually all that important–and yet, it’ll get 100% of the credit.

Lastly, who takes care of consumers once they go from being prospects to being fully-blown qualified leads?

Learn more about the different types of attribution models: